Who is Saint Dennis?

The Patron Saint of Our Parish

Saint Dennis at a glance (spelled Saint Denis in French):

The Undying Faith and Service of Saint Dennis

Born in third-century Italy, Dennis was recognized for his virtue, knowledge and faith when the pope sent him to what is now known as France. There, Christians were experiencing severe persecution. Dennis and two other missionaries settled on the island in the Seine River, in the heart of today’s Paris. They built a church and bravely and diligently preached the Gospel, converting countless followers.

The pagan priests were infuriated and, along with other angry citizens, demanded that the governor arrest the missionaries. Through numerous tortures, the captors tried in vain to kill the men, but their unbroken spirit and bodies remained faithful servants of the Lord. The captors finally were able to kill them on the highest hill in the area, now known as Montmartre (mountain of the martyr). The faithful of Paris later built a basilica in honor of Saint Dennis, and this magnificent church still stands.

Saint Dennis showed amazing faith and commitment in his love for God, squeezing more out of life and his service than seemed possible. His life inspires this holy truth: Faith will keep us going.

Saint Dennis, pray for us
as we try to follow
in your faithful footsteps. 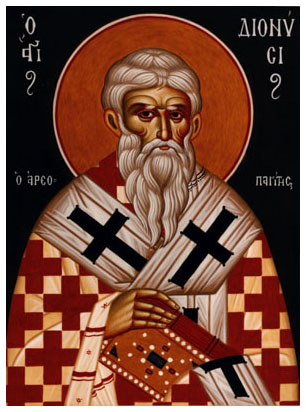